Paran Stevens was born in Claremont and resided here until 1843.  During this time he became one of Claremont’s foremost citizens.  He was the proprietor and owner of Claremont¹s leading hotel, the Tremont House.  Leaving Claremont, his business expanded until he became the best-known and most successful hotel operator in America managing the New England, the Revere, the Tremont Houses in Boston, the Fifth Avenue Hotel in New York City and many others.

Not forgetting his birthplace, in 1866 he offered the sum of $10,000.00 to help in the founding of a high school upon the condition that the town should raise an equal sum for the same purpose.  The town voted to raise and appropriate $15,000.00 which with Mr. Stevens $10,000 was to be used to purchase a lot and erect a school building.  A committee of four selected the nearly two acre homestead lot of the late George B. Upham at the corner of Broad and Summer Streets and purchased it for $2500.00. The building was completed within two years at a cost of $27,000.00, Mr. Stevens increasing his original gift in order to bear half the cost of construction. The three story brick building which contained four large classrooms, large vestibules, a basement for the heating plant and a spacious hall on the upper floor could accommodate 125 pupils.

At town meeting in 1868 the citizens voted to name the school after its benefactor and Stevens High School formally opened on Sept 7, 1868 with an enrollment of 98 pupils and a faculty of four including Dr. Nathan Barrows, the principal.

Soon after the completion of the high school, Mr. Stevens established a permanent trust of $10,000.00 of which the income was to be used for the support of the school.

At his death in 1872 his bequest added $40,000.00 to this fund.  Owing to litigation in connection with the estate, the bequest wasn’t paid until 1901 at which time the trust received the sum of $72,050.00.  The life-size pictures of George Washington and Daniel Webster, which hang on the walls of the auditorium, and a Chickering concert grand piano were also gifts of Mr. Stevens.

The first graduating class of 1871 contained twelve members and graduation exercises were held at the Opera House as the high school even at this time was not large enough to accommodate the event.

A second permanent trust fund for the support of the high school was established in 1901 by Mrs. Helen R. Healey, a resident of Claremont, who bequeathed to the town the residue of her estate amounting to $71.420.00.

By 1908 the number of pupils had increased to 156.  An addition was necessary and on April 10, 1909 the town voted the sum of $8,000.00 for this purpose.  Work was begun at the close of the school year.   The addition, consisting of a single story of 94’x 32’ extending across the front of the original building, was completed during the summer.  This new addition contained a laboratory, a classroom, a manual training room in the basement and a headmaster¹s office making a total of nine rooms.

By 1914 even this addition was found to be inadequate.  The student body had reached 217 and it was obvious it would continue to increase.  Accordingly, in the spring of 1914 a committee was formed to secure plans and estimates of cost. At the town meeting on March 9, 1915, an appropriation of $73,000.00 was voted for the purpose of enlarging and remodeling the building.  Work started before the end of summer and was completed by Dec. 31st, the students  still using the rooms of the old building for classes.  The new structure of brick with cement trimming contained twenty one rooms and a new assembly hall that could accommodate 300 on the floor and 50 on the stage.  By then, the student body has risen to 239 with a faculty of nine regular teachers and three special teachers.  By 1929 the school board upon consent of the General Court took over the responsibility of Stevens High School from the town.

In 1929 the building was once again remodeled at a cost of $300,000.00.  A new annex of three floors containing fifteen classrooms, a gymnasium and a remodeled auditorium was added to accommodate the Junior High School. The older part was also greatly altered and various improvements were installed.  At this time the teaching staff had increased to nineteen and the enrollment was 434.  For the next three decades the school proved adequate for the number of students enrolled.

Then in 1958 the junior high school moved into their own building thus creating more space for the high school.  At this time, two rooms of the annex were remodeled for offices of the Superintendent of Schools.

In 1962, when, once again, more space was needed, another addition at a cost of more than a million dollars was begun and completed in 1963.  This addition provided a new cafeteria, an improved gymnasium and twelve new classrooms including a language lab and an art room.  The student body now totaled nearly 600 and the teaching staff had increased to thirty six..

Currently Stevens High School employs a teaching staff of fifty five which encompasses both the high school and tech center and contains a student body of  715.  To date, more than 12,900 graduates have passed through the doors of Stevens High School. 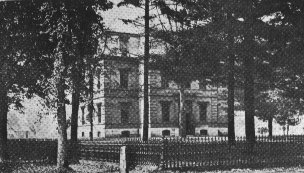 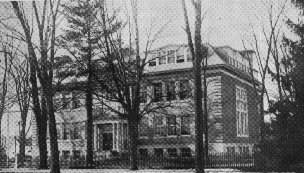